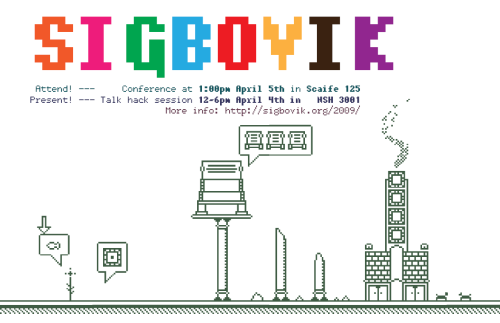 This Sunday is SIGBOVIK 2009! Be there! I will be formally presenting Arkan∞id, whatever that could possibly be!
Posted by Nels at 2:13 PM 2 comments:

Sick Ridiculous and the Sick Ridiculous
Originally uploaded by bennypinto.
This might be a good time to mention (over a week after the fact!) that our Lava Lounge show went really well. We were a little concerned about turn-out, but of course as it TURNED OUT, we had no reason to be. Our friends came out in droves, and for that we thank them. The place sounded really good, and we were pretty happy with our performance.

I just got back from Boston. I was there over the weekend for a conference of Brianne's. Boston is fun to visit, but so different from Pittsburgh. I am glad to be back.

This week, Aditya, my mentor from Microsoft Research India, is going to be in town. He'll be speaking and we'll be meeting and trying to get some "research" together. Should be fun!
Posted by Nels at 2:34 AM 3 comments:

The Smartest Guys in the Room

Just finished reading, The Smartest Guys in the Room: The Amazing Rise and Scandalous Fall of Enron. This is a good book, and I highly recommend you read it. It basically tells the story of Enron. It seems funny to think about Enron now, since the scandal was such a big deal at the time. Given the current collapse of some of America's larges financial companies, it seems a little quaint in a way. But it definitely serves as a lesson about the dangers of following the crowd in a bull market.

Enron's biggest problem was basically that they didn't have a lot of cash. They were constantly making "deals" that they would immediately book as profit, using mark-to-market accounting, but then those deals often wouldn't pay any actual money for years. They spent tons of money on losing ventures, but were terrified of listing any debt on their balance sheet, so they created all kind of shady, Special Purpose Entities; nominally independent investment partnerships that would take on Enron's debt, with a wink & handshake agreement that they would never lose money. When it became obvious how much debt Enron really had (something like $40 billion) and how little cash was coming in the door, everyone ran for the exits.

I did come away with new new-found respect for short-sellers. Far from the vultures they are often presented as, short-sellers do a valuable job of uncovering the hidden realities buried in quarterly reports. These are often the realities that a stock's "cheerleaders" are entirely unmotivated to find. In this case, it was the short-sellers who started asking the tough questions.
Posted by Nels at 10:16 AM No comments:

Don't forget (if you ever knew in the first place) that tomorrow, Sick Ridiculous and the Sick Ridiculous will be playing at the Lava Lounge which is on the south side. It should be rad. Here's the full recap, and more details can be found here, here and here.

Date: Thursday March 19th 2009
Sick Ridiculous, Big Hurry and the Central Plains (In that order)
Doors: 9pm
Sick Ridicuous: 10pm
Cost: Less than or equal to 5USD
Locale: The Lava Lounge, 2204 East Carson
Posted by Nels at 10:55 AM No comments:

Watch this music video from Jurrasic Five and DJ Format!
http://www.vimeo.com/361491
Posted by Nels at 7:30 AM No comments:

I just recently finished reading the second of two history books that I received over Christmas. The first, American Lion, was about Andrew Jackson. The second, Team of Rivals, described Lincoln and his cabinet. Both were told through extensive use of primary sources, mainly personal correspondence. Both were long, but e the end very good, and this comes from someone who doesn't read much history.

Lincoln is especially fun to read about since, as you may have noticed, he is sort of a super hero/mythological character in American society. It's hard to know how much of this praise is warranted. Team of Rivals, gave me a great impression of Lincoln, but what seemed to be an honest one. He was definitely a politician, but an excellent one in that he succeeded uniting very different groups within the Republican party. He was the kind of guy that everyone liked once they met, but was often made fun of. It was especially funny to hear him referred to as the "prarrie lawyer," since at the time being from Illinois not exactly a mark a sophistication.

Okay, in short I would highly recommend both books if you have a fair amount of time on your hands!
http://www.cs.cmu.edu/~nbeckman/books.html

Just wanted to remind you all of your constitutional obligation to submit to SIGBOVIK 2009, CMU's preeminent fake conference in computer science. This year we've got an EasyChair submission site, just like a real conference. I am currently working on a (secret) project that will be the basis of my submission. It's sucking up all my free Spring Break time, but is pretty fun. I'm not actually sure that this will be at all funny, but it certainly will be strange and something that could not otherwise be submitted at a real conference.

On Saturday night I went to a heroes/villians costume party as The Shoveler, from the movie Mystery Men. Not too many people recognized my character. I guess that movie wasn't as popular as I remembered. If you have thefacebook, here's a picture.
Posted by Nels at 7:29 AM No comments:

Today marks the beginning of Spring Break 2009, which means it's extremely quiet around the halls of Wean, um, Hall. That's okay. I'm in a relatively good mood.

Yesterday I found out that a paper that I co-authored was accepted at ECOOP 2009. It's called "Practical API Protocol Checking with Access Permissions," and it describes a case study in using the protocol checker Plural to find bugs in real programs. Actually this is mostly Kevin's work. He is the primary author, and this paper comes in large part from his thesis which he is diligently working on. But he doesn't have a blog, now does he? So that means I get to bask in the Internet glory. Um, and you can check out the submitted version of the paper here. (Also congrats to Ciera whose paper was also accepted!)

But the acceptance of this paper definitely has consequences for me, since I was planning to resubmit my failed TRANSACT submission to an ECOOP workshop. Now I'll really have to get on that since I might actually be able to go. (It's in Genova, Italy. How very swank.) I've never yet been to ECOOP, which has a slightly more theoretical and I guess European feel to it than, say, OOPSLA where I have been a couple of times.

In other news, I finally saw "Frost / Nixon," or as I like to call it, "Frosted Nixons." Good movie. As you've no doubt already heard, Frank Langella does an amazing job of portraying Nixon.
Posted by Nels at 4:25 AM 2 comments:

Today was the last day of "Introduction to Separation Logic," a mini-course that I am taking from the creator of Separation Logic himself, John C. Reynolds. It was a good course. Even though I found it difficult, I actually got a quite a good deal out of the course because I decided to take it for credit and therefore I actually did the homework. This will come as no surprise to many of you, but if you actually do the assignments in a course that is centered around proofs you get so much more out of it than if you kind of just take the theorems as already having been proved by someone else.

The weird thing about separation logic (for me) is how different it is from other logics that I have learned which were based upon "hypothetical reasoning." Hypothetical reasoning, I am lead to believe, it pretty much the latest, greatest way of presenting a logic. You get this context of assumptions and then you can do your reasoning from there, using facts from your context whenever necessary.

Proofs in Separation Logic had a much different feel. In it, you have a whole bunch of rules that are implications. There also aren't really introduction and ellimination rules, just more rules. Every single proof that I did was like this:
I want to prove
P => D

Therefore, I start with the rule
P => P

Then I find things that P implies that are slighly closer to D...
P => P'

If you're interested, and outside of CMU, you can get the lecture notes for the entire course from John's web site. This is a great way to learn separation logic which has recently become kind of a big deal.
Posted by Nels at 10:12 AM 2 comments:

Last night Sick Ridiculous and the Sick Ridiculous played a party; the CS CMU Open House Weekend After-Party. The party was great. There were tons of people. And while our set started off a bit rocky, eventually we got it together and made something good happen. This included our final, and newest song, OPENHO~1.MID, a ode to Open House Weekend. I encourage you to go out right now and download it for free at the following uniform resource location:

To those of you who showed up and cheered us on, thanks!
Posted by Nels at 7:15 AM 3 comments: